The Temptation of Dual-Axis Charts

Sometimes when we are trying to show relationships over time between two dimensions of the same metric, or two separate metrics, we run into a situation where differences in the scales involved make it difficult/impossible to really tell what is going on using a standard line chart. One solution we may be tempted to turn to: a dual-y-axis chart, with an axis on the left for the scale that fits one dimension or metric, and a separate scale on the right that fits the other dimension or metric.

Tempting, but risky. This post walks through a couple of scenarios and demonstrates why due care and attention is needed to avoid pitfalls of dual-axis charts. I will follow-up with a post that highlights some alternatives for consideration, instead of giving in to the dual-axis temptation.

The Trap of Dual-Axis Charts

The general idea here is that dual-axis charts should be avoided if possible, because they suffer from at least two flaws:

What the Experts Say: Avoid

Data visualization experts generally recommend against the use of dual-axis charts, for similar reasons cited above (and sometimes more). For example, in the book ‘Better Data Visualizations’* by Jonathan Schwabish, he has a section called ‘Avoid Dual-Axis Line Charts’ that covers similar territory to what is discussed here.

With that baseline-setting, let’s dig into some scenarios and examples to make the point more clearly. As usual, the examples here are produced using R, with ggplot2 package as the preferred visualization tool.

There are two common scenarios where dual-axis charts become tempting:

Most charting tools allow for the creation of dual-axis charts. Most relevant for our purposes, this can be done in ggplot2:

Suppose we are interested in crypto currencies and are curious about how a crypto currency like Cardano, with its token ADA compares against Bitcoin (BTC).

As always, the visualization choice should be based on what questions we are trying to answer, what we are hoping to learn, and, ultimately what decisions we want to make.

If we don’t have a specific objective beyond curiousity and want to start with general exploration, we still need to frame up our exploration. Our first thought may be to compare prices over a recent period, to answer questions like:

So we gather some price data (Cdn$). Here is a random sample of rows, along with summary data. We can see the two sets of prices are on much different scales.

This is confirmed in a basic line chart produced in ggplot2: (click into code block and scroll/drag horizontally)

This shows us the pattern in Bitcoin prices but due to difference in scales, doesn’t help much with any of our questions around comparing patterns between the two currencies.

A common approach, then, is to use dual y-axis, with different scales on each, to enable visibility of the data side by side. This can be a trap if not managed carefully, though. There are two key questions to ask:

1. what should the range of the second axis be?
2. How to make it as easy as possible for user to interpret, without having to wrap their heads around lining up different data with different axes.

Depending on your tool of choice, you may have a variety of options. For example, default two-axis chart in Google Sheets looks like this:

It takes a bit to get oriented and in this case depends on your knowledge that BTC has much higher prices, so must be the left axis, and ADA is on the right axis. (this could be handled with better axis labelling)

The thing I notice here is that once I get settled that the blue line is Bitcoin, I can easily line up the start against 40,000 or so and as I follow the trend over time and get near the end, my eye gravitates toward the closer axis on the right – just under 3. Then I realize that doesn’t make sense and I switch back to the left axis for reference. So my brain is spinning a bit. Similarly with the red ADA line, where my tendency at the start of the period is to associate it with the left axis, then adjusting to look all the way over to the right axis and continue from there.

Once we get through that, the dual-axis does provide a way to view the two data sets alongside each other with much more granularity than the previous chart. In terms of the patterns we are looking to discover, it shows a relatively close relationship in trends and some points, divergence at others. Both have trended up over time. Maybe Cardano is more volatile, prone to relatively higher peaks and lower troughs?

Before we go too far with our conclusions, though, there are some further subtleties that we should be aware of.

The above Google sheets chart is based on an automatically-selected ratio of 25000:1 in the two axes. This automatic selection may be suitable in some cases, but not necessarily all.

In R, ggplot2 includes the option to add a secondary y-axis and set the transformation from the left axis to the right axis. This provides flexibility, but also comes with a caution: 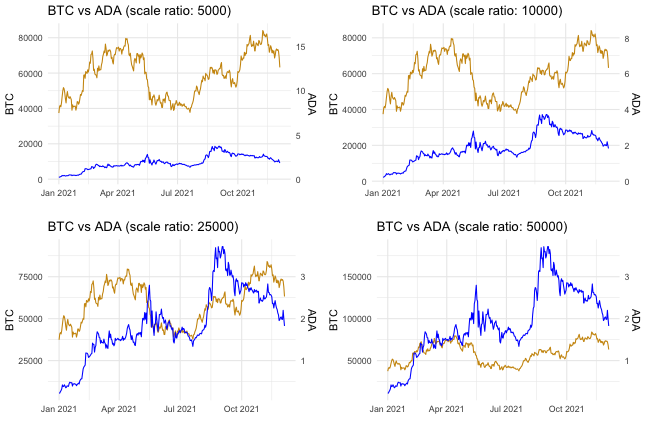 Note: GOLD line = Bitcoin, BLUE line = ADA. The charts are simplified for this demo; in a more formal presentation, the data-axis match would be made more clear on the charts themselves.

In terms of relative scales, the smaller the ratio used, the more the secondary axis is stretched out. The result:

I’m not sure there is a clear/correct/easy answer here. It is just a hazard that comes with these charts, something to watch out for when data is presented this way, and a reason to be wary of using dual-axis charts.

The bottom line is that the answers to our questions may vary with the ratio between the two scales, may lead us to different conclusions, may cause us to take or recommend different actions depending on which view we are looking at, even though it is the same data.

As far as finding a fair/reasonable transformation value, one way to go about it may be to calculate an overall ratio of the two datasets. For example, rather than picking a number:

Median BTC vs ADA is 34242.71 so this could be useful for transformation, at least as starting point. You could 1) use this directly, as below, or 2) use it to guide you toward a nearby number that is a nice, round number to work with. For example, a reasonably close multiple in this case is 10,000 (chart in the top-right of the 4 charts above). This is much easier for a person to relate to when comparing the two axes, making it slightly less daunting.

The takeaway for me here is confirmation of the ‘best practice’ warnings to avoid the tempatation of dual-axis charts: both because of how the story in the data can be manipulated and for the mental gymnastics required to parse out what that story is.

Let’s see if this conclusion holds up for another scenario…

Scenario 2: Comparing a Count and a Ratio

In other cases, we may want to compare patterns in a volume or count metric with a related key indicator. Here’s an example using some Google Analytics data for a website:

Interesting questions with these metrics can include:

Quick look at the data:

Looks pretty messy but there does seem to be some degree of opposite movement in these two metrics. There is also the precipitous drop in conversion rate at the start of the period that is probably worth looking into, especially since there is little change in volume of users at that point.

When working with two different types of metrics, a variation on the line charts that can help to bring out the message within the data is to combine bar chart and line chart.

In the example below, I have changed the transformation ratio from the median calculation (~26 million) to 10 million. This maybe provides a more intuitive way to interpret the relationship: it is easy to see that when the scale doubles on one side, the other scale doubles as well. 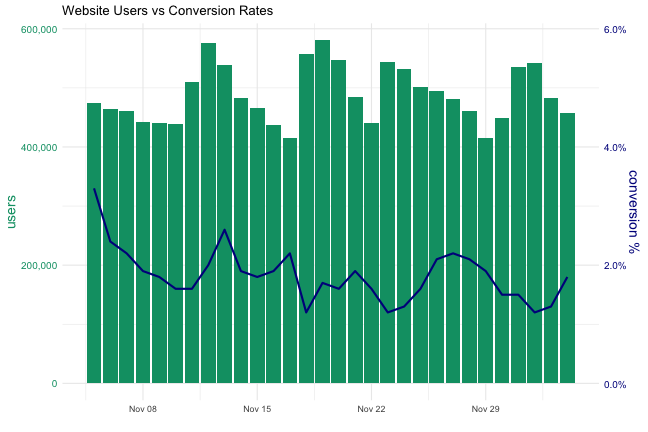 It does seem somewhat easier to untangle the relationship using the bar and line combination, along with the even 10M:1 ratio. From this view, it looks like there is no consistent pattern in the trends between the two metrics, with conversion rate sometimes rising with user count increases, sometimes dropping. So that provides us with some answers to our initial questions about the relationship.

We are still left with the same challenge, initially at least, of wrapping our heads around what is going on here, which axis is which, what the relative values are.

This second scenario confirms that even for a different use case, dual-axis charts are problematic. The competing scales are an issue and switch to a combo of bar and line may help, but doesn’t remove all the problems.

As the above examples highlight, if you are unable to resist the temptation to display your data in a dual-axis chart there are some things to do in order to make it as easy as possible for users to extract meaning:

Alternatives to the Double-Axis

On the other hand, if we are to resist the temptation to dual-axis charts, what are the alternatives? I’ll share my thoughts – and examples – in the next blog post.

View all posts by John